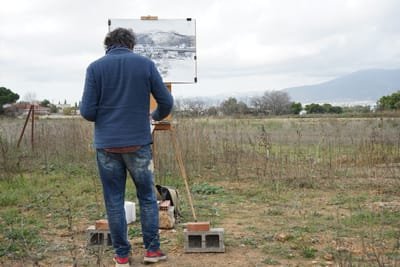 The starting point of my painting is landscape. To start working, I set myself up within the landscape (on the spot) because I believe that it is of utmost importance that, during the project's production, one feels the immediacy of experience. In this way, I can sense the weather parameters within which the landscape is immersed, while by direct observation, I can ensure multiple points of perspective compared to what the use of a photo would offer me. I usually elect to paint deserted, empty or semi-abandoned by human presence places because of the eerie, melancholic dimension they exude. It is important to note that my approach in painting is by no means limited to the literary "illustration" of the subject matter. Instead, my perception process is an abstract study of geological morphologic incidents, simulating a cartography process.
Moreover, this obsession with cartography inspired me to create a body of purely abstract paintings based on the grid. Just as in landscape paintings, where every tiny brushstroke is modulated in colour as they are juxtaposed, the same applies to abstract works where every colour value changes as each square of the canvas is painted. But what is radically different in the latter is that the continuous stimulus does not derive from observing the natural world. Still, on the contrary, it is the result of an invention based on mathematical algorithms and the theory of musical counterpoint. Applying an extremely dense grid design, I aimed to produce images in which all kinds of dominant shapes entirely disappear. Instead, the work is broken down into a series of divisionism sequences of light and shadow that constantly neutralise each other, either "build-up" an eerie light. Finally, this body of paintings evolved into my first solo exhibition.
In artworks including human figures, I create a kind of theatrical setting in my studio, where the model fits into it semantically, taking on a role. I tend to paint my setups in life-size as my goal is to produce an image that is too "vivid", not only through the realistic painting effect on the actual scale but also at the level of narration. Through this project, I try to address existential issues of identity, gender, and the relationship between the two genders.
Finally, I must note that I feel the need to move to different realms of visual style from time to time, as this prevents a "drying up" of creativity, while on the contrary, introduces fresh perspectives and ideas.